This vulnerability was discovered using Drupal 9.3.4 and 9.3.6, in miniOrange Premium versions 8.x-30.3 and 8.x-30.4. It has been confirmed to affect the Drupal SAML SP modules provided by miniOrange utilizing Okta. Other authentication schemas and content management systems may also be affected.

miniOrange Enterprise and Standard versions may be affected but were not tested. Xecurify has released patches for all variants of miniOrange since the discovery of this vulnerability: Standard, Premium, and Enterprise. It is advised to upgrade to the newest available version of miniOrange, regardless of free or paid subscription service, as it is possible this vulnerability is present in multiple product and release versions of the miniOrange Drupal SAML SP module.

This vulnerability has not been identified in the free versions of miniOrange.

However, removal of this signature will bypass the signature check entirely. As a result, an attacker may simply remove the signature in the SAML assertion from an IDP, modify the username and/or role, and forward the packet on to the web server. The web server will interpret this manipulated package as a valid communication from the IDP, and allow the attacker to access the application with whatever user account and role he chooses.

Let’s look at a simplified example:

A web application possesses a login button that redirects the user to an external authentication source. As the user is redirected, a token or session cookie is often attached to their request. The username and password provided by the user are never sent to the web application - but to the Identity Provider (IDP) authentication service. This service will validate the user’s credentials and - if present - conduct a two-factor authentication step. Once authenticated, the IDP will bundle up information about the user such as username, user role, status of authentication attempt (successful or failed) in a SAML Assertion response. This assertion is signed to validate that (a) the IDP and only the IDP generated the data and (b) that the integrity of the data has not been compromised.

In a functioning SAML schemas - any manipulation to the data in-trasit results in a small but significant change to the signature. The signature contained in the SAML response is compared with what the web application possesses. Any differences between the two will result in the authentication attempt failing. In the versions of MiniOrange discussed in this write-up, this functionality did not fail, and signature changes were correctly detected.

During the authentication process, an attacker can modify the contents of a SAML assertion to impersonate users or obtain unauthorized role access. This is accomplished by intercepting the SAML response from the IDP, modifying it in-transit, and forwarding it to the web application. In the vulnerability discussed here, SAML replay attacks were also possible. As such, once a single SAML Assertion is obtained by an attacker, whether through Man-In-The-Middle attacks, Cross-site Scripting, etc. - it can be reused repeatedly. If an attacker is able to intercept or obtain a SAML assertion for an application, the application authentication and authorization logic can be bypassed. During testing, credential checks and two-factor authentication were both bypassed. Likewise, I was able to assume any valid role within the application. 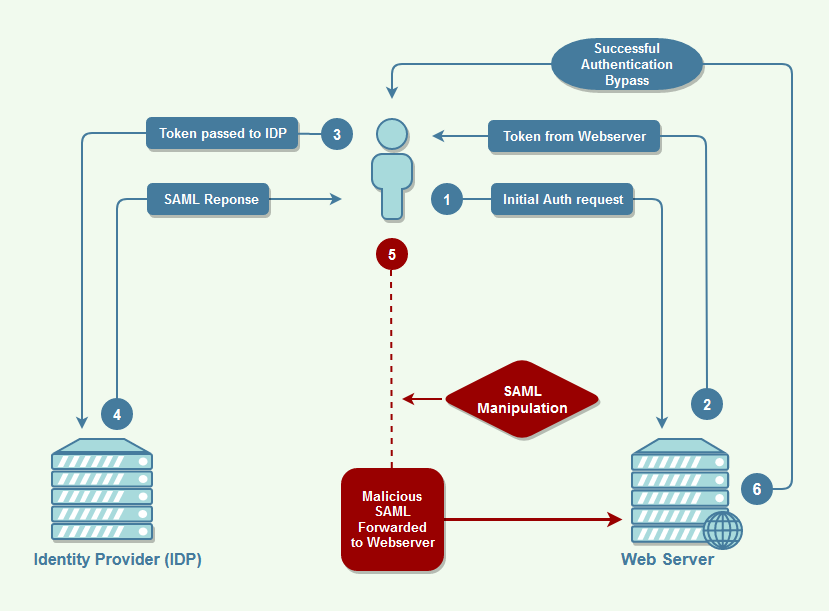 When modifying a SAML Assertion, we can capture the traffic in an HTTP Proxy like Burp Suite and view the SAML data. In order to bypass authentication in these versions of MiniOrange, an attacker only needs to know (or guess) an existing, valid username. This can be accomplished through fuzzing different common usernames such as WPAdmin, Admin, Drupal_admin, or through directly targeting known usernames. Once identified in the SAML Assertion, the username only needs to be replaced with the targeted username.

SAML Assertions are encoded. Encoding is not encryption however, and it is trivial to decode. Once decoded, we can locate and modify the username. Here, I changed my user account to an admin account within the SAML Assertion:

If an attacker does not know or does not want to guess an existing username they can modify the user role. An existing user may be malicious or an attacker may have valid credentials and want to elevate their privileges. To demonstrate, I modified my user role to “Admin”:

After modifying the username and/or the user role, an attacker may remove the signature and forward the packet on to its final destination at the web application server. We will be met with a response like this one - indicating a successful authentication and a redirect to the webpage - now as an authenticated user:

This authentication bypass was confirmed through testing to affect MiniOrange Premium versions 8.x-30.3 and 8.x-30.4. The vulnerability was disclosed to the vendor and to the Drupal security team on March 1st, 2022. The MiniOrange team at Xecurify released a patch the same week. Their disclosure statement can be found here.

The bug Guistini discovered was identified to be related to poor enforcement of x509 Certificate values and SAML assertion signatures. Unfortunately, in the vulnerability I disclosed in early March and discuss here - the selection of these options makes no difference. The signature existence check is bypassed regardless of user configuration in the premium versions of MiniOrange noted here.

The Premium, Standard, and Enterprise versions of MiniOrange are only available for download from Xecurity for paying customers. The vulnerability described in this write-up was not assigned a Drupal Security Advisory, as it is only available through Xecurify, and not through the Drupal marketplace.

Xecurify advises users to update to at least the following versions:

“If you are using an out-dated/vulnerable version of the SAML SP module, you can download the latest version by signing in to your miniOrange dashboard using the registered credentials”.